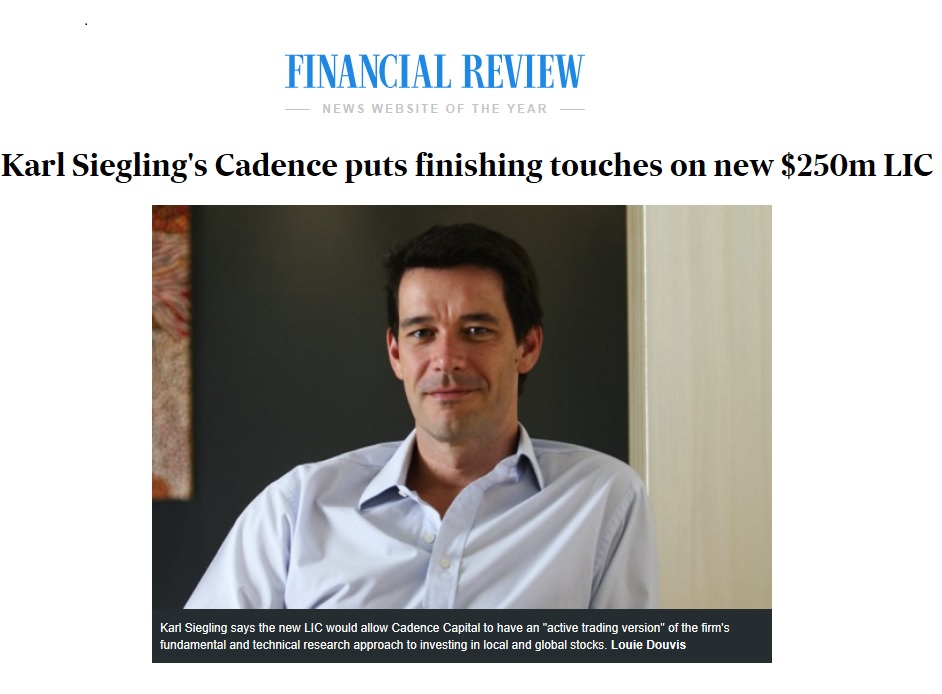 Cadence Capital, founded by markets stalwart Karl Siegling, is planning a $250 million-plus listed investment company for shorter-term trading ideas as it nears a dozen years on the ASX.The new LIC – to be called the Cadence Opportunities Fund   – is being pencilled in for a listing on the local bourse late in the third quarter, after joint lead managers are appointed on the deal.

Mr Siegling said the new LIC would allow Cadence to have an “active trading version” of the firm’s fundamental and technical research approach to investing in local and global stocks.

“There are a lot of mechanical things that are taking place that create a distortion in [share] prices and that creates opportunities,” he said in an interview.

“We haven’t really been benefiting from those six-to-18-month, short-term opportunities.”

Mr Siegling added that he believed the strategy – which will also focus on smaller positions in stocks – would work well in periods of volatility and even when there were a high proportion of stocks trading on high earnings multiples.

But not all local LICs have had a positive experience after listing this year.

The most notable example may be the L1 Long Short Fund which has been weighed on by disappointing short term performance.

LICs and exchange traded funds have become increasingly popular among investors in the past five years.

The Cadence pitch, like its peers, will lean on track record and performance metrics.

Cadence started investing in global stocks in its existing fund about four years ago, a strategy Mr Siegling said had paid off.

“We dipped our toe in the water initially with global stocks four years ago.

“We’ve had a softly softly approach to investing offshore and it’s been successful and is generating alpha.”

Cadence Asset Management was established in 2003 and three years later Cadence Capital listed on the ASX.

The existing operation houses about $420 million in funds under management. But it is fees and performance numbers that investors will closely scrutinise.

Cadence has gross returns of 15.5 per cent per annum since inception, which eclipses the All Ordinaries Accumulation Index by 8.8 per cent over the period. The fund also outperforms its benchmark over one year, but underperforms over three years.

ARQ Group, Emeco Holdings and Macquarie Group are the top three holdings in the existing fund, while its biggest positions globally are a long holding in Teva Pharmaceutical and a short position in Tesla Inc.

Mr Siegling said Cadence Asset Management will pay fees and expenses relating to the LIC offer, a growing trend in the industry which alleviates the LIC starting listed life below net tangible assets.

Cadence Capital shareholders are being offered a priority allocation in the initial public offering.

Mr Siegling plans to be chairman of the new fund and will appoint two independent directors. Former IPH managing director David Griffith has already been lined up as an independent non-executive director.

Existing key personnel at Cadence including Wayne Davies, Alan Crozier and Charlie Gray will stay in place for the new fund and a sales trader hired to join the team.

The opportunities fund plans to have management fees of 1.25 per cent and performance fees of 15 per cent.

Register your interest in the Cadence Opportunities Fund IPO