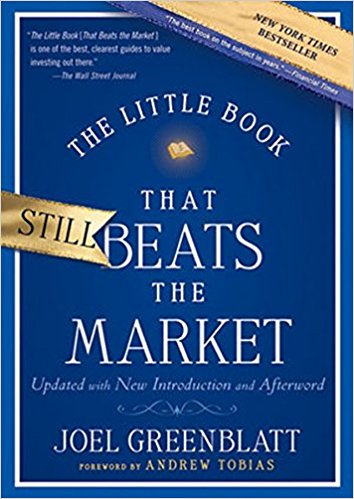 The Little Book That Beats the Market by Joel Greenblatt

The Little Book That Beats The Market was inspired by Greenblatt’s desire to teach his five kids how to make money in the stock market. He thought that if he could do this, it would be a valuable gift that would assist them through life. And so the book is written in a way that could be understood by children, with Greenblatt’s significant experience and success in managing money (his hedge fund Gotham Capital achieved a 40% annualised return from 1985 to 2006) distilled into simple light hearted anecdotes that capture the core of his investment process and ideology. He even synthesizes it further into a ‘Magic Formula’, a method that can be followed step-by-step to achieve returns well above the market.

Luckily, despite its simplicity, or perhaps due to it, the book is actually quite profound in its message. The book initially follows Jason, an 11-year-old chewing gum salesman, who is successfully selling packets of gum with a small mark-up at school, in order to make a profit for himself. He uses the story to build up the basics of a business, and to ask his son, how many packets of gum do you think Jason could sell, how much profit would this generate, and based on this how much would you pay for a share of Jason’s business. This, he stresses, is the same way you should approach buying shares in listed companies.

The book also discusses the difference between price and value, where Greenblatt points out that the share prices of even large companies rise and fall dramatically within any given year despite the fundamentals of the underlying businesses remaining relatively consistent. He then points out that while many market commentators try to ascertain the reason for the wild swings, you don’t need to know why, you only need to know that they happen and that these movements can be taken advantage of if you think the price is significantly different from underlying value.

Greenblatt talks through the many attributes that could constitute a ‘good business’ and settles on one characteristic as the most important – its return on capital. He compares Jason’s gum business, where a new gum stall earns a 50% return on the cost to set it up, to a rival business which generates a 5% return. He summarises the two most important features he looks for in an equity investment – a high earnings yield (or low P/E), and a high return on capital. In his words, he wants to purchase a good business at a low price.

The book concludes by discussing the ‘Magic Formula’, which has historically achieved returns of around 30% p.a. Now we won’t spoil the finale to the book, so if you want to know exactly what the formula entails, you will have to read it!

Overall, it is an enjoyable read, and importantly cuts through a lot of the complexity of investing to focus on what really matters.