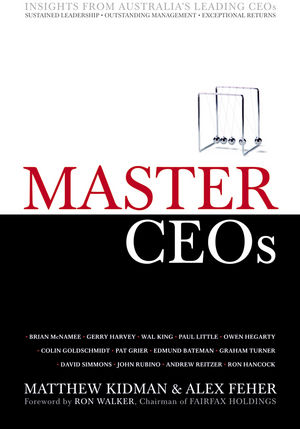 Master CEOs is a series of interviews with CEOs of Australian listed companies. The CEOs were chosen based on excellent long term shareholder returns of the companies that they were in charge of. Australian investors often end up reading books that are US focused, and it is refreshing to read a book with an Australian focus. We had previously invested in both Zinifex and Oxiana and were very interested to read the chapter on Owen Hegarty and OZ Minerals (formed by the merger of Oxiana and Zinifex).  Owen was a very enthusiastic promoter of the company and I was surprised to read that the majority of his “typical day” was taken up with presenting to investors. The book also has a chapter on Ron Hancock, who is currently a director of Cadence Capital Limited. Ron founded and built up Wide Bay Australia over almost 50 years before his retirement in 2013.

GET THE BOOK MORE BOOK REVIEWS

﻿﻿﻿﻿﻿﻿﻿﻿ At the 2020 Cadence Opportunities Fund Annual General Meeting and Investor Briefing, Chairman Karl Siegling initially gives an update on the company’s performance and the Rights Issue and Shortfall Offer. Karl and portfolio managers Charlie Gray and Jackson Aldridge then discuss a number of portfolio positions and then close off with the outlook for […]