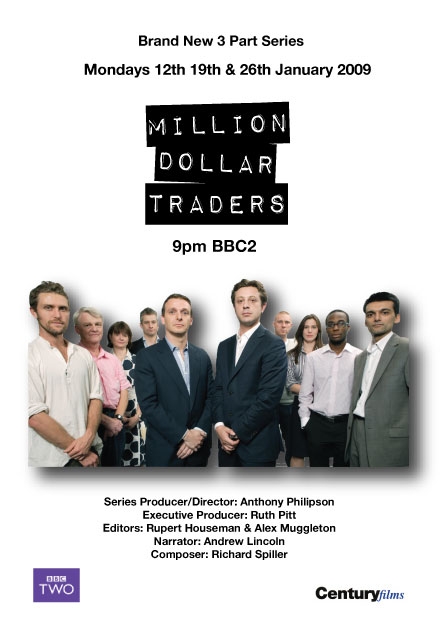 What happens when you take eight people without any prior trading experience and give them one million pounds to manage in the markets for two months, especially when this happens  at the onset of the global financial crisis? Enter Million Dollar Traders, a situation created by hedge fund manager Lex van Dam, who wanted to see if he could turn people off the street into professional money-makers. He employs former city trader Anton Kreil to oversee the team, and his money, as they run head first into putting on trades in one of the most tumultuous times in recent market history.

The eight aspiring traders are selected from a larger group of volunteers based on only two factors, 1) having a good handle of basic arithmetic, and 2) being able to work under pressure. They are then put through an intensive two-week course covering the basic aspects of trading including technical and fundamental analysis, and psychological bias. After this, the two month period starts, and they must begin trading with Lex’s money.

From the beginning, cracks start to appear as the traders realize it is not as easy as it seems. It is captivating to witness the traders going through the psychological battle that takes place internally when real money is on the line and the stakes are high. Some are more affected than others.

The traders that make it to the end may surprise you. You may even see a bit of yourselves in them. There is also a weird sense of satisfaction to see others go through the all too familiar tussle with their emotions. This is a must watch series.