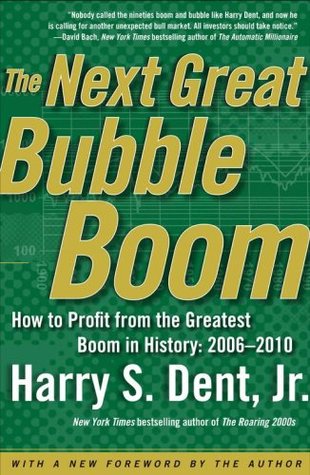 The Next Great Bubble Boom by Harry S. Dent Jr.

Harry Dent made a name for himself in his earlier years predicting major market moves such as the Japanese slow down and the Tech wreck .

We first read this book of his in 2005, and at the time found it a very interesting and insightful read. In this book he explains amongst other things how demographics, and his ‘spending wave theory’, has an effect on markets. Unfortunately, he was quite wrong in his market predictions on where the Dow and Nasdaq would be by the end of his predicted cyclical bull market period of 2005 to 2009.

Even though this book is a little dated, we think it is worth the read for Dent’s insights into market cycles and the market psychology behind these. His discussions on the ‘Human model of forecasting’ and the ‘Seven human realities of investing’ , we think, are most probably the most important parts of the book.