Is the next resources boom starting?

This article was written by Karl Siegling was originally published in the January 2017 ASX Newsletter.

Below is a chart we presented at our most recent Annual General Meeting depicting the S&P/ASX 200 Resources Index over a sixteen-year period. Within this extended period, we see a resource ‘boom’, the Global Financial Crisis and subsequently the resources ‘bust’. This chart depicts the truly cyclical nature of resources and the large demand supply imbalances that result from the huge amounts of capital that need to be deployed to extract commodities.

As Ed Seykota famously said in his interview for ‘Masters of the Market’; ‘Commodities are the purest form of trading in the world and resource companies are a leveraged version of the same trade’. 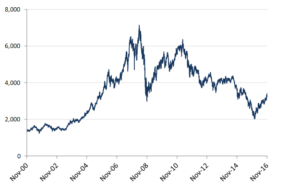 Readers may remember the resources mantra of ‘stronger for longer’ from around 2002 until 2007, initially the story was one of China growth. As the resource boom continued the mantra evolved to ‘stronger forever’ and included India so that the combined mantra became ‘Chindia, stronger forever’. Of course, history tells us that since that date the resources index fell around 72% from top to bottom. Just as very few experts predicted the initial resources boom and the subsequent resources bust, so market participants will have great difficulty predicting the next resources boom.

The interesting question that this chart poses is; ‘Are we currently in the next resource boom’? It is twelve years since the last resources boom and nearly nine years since that boom bust.  The Resource market is up more than 50% since the index ‘bottomed out’ at around 2,000 in January 2016.

One consistency with the latest resource rally is that is has taken most market participants by surprise. Just as we had convinced ourselves that the booming market would never end, we more recently convinced ourselves that the falling market would never end….and then suddenly in January and February of this year it did. The sectors within this index that have performed exceptionally well have been iron ore and energy, particularly coal.

The million dollar question of course is are we in a new upward trend or are we just in a longer term secular downward trend for resources, with a brief rally? The follow on question would be; how do we profit from resources in this environment?

Having spent significant time on this sector in the second half of this calendar year, evaluating companies as well as visiting resource companies in Perth and Queensland as well as mining services companies, an initial conclusion is ‘the worst of the resources bust is behind us, but the signs of a resources boom are tentative’. This is a quote from the CEO of a medium size mining services company in Perth and I think it sums up the situation well. Stock markets can be very efficient and the Resources Index has started to move upwards at the first tentative signs of a recovery.

The worst of the resources bust is behind us, but the signs of a resources boom are tentative

Many mining services companies have already started to react to these signs of recovery. Prime examples from our recent visits being, Monadelphous, Imdex, Maca Mining Services, GRG Engineering, Austin Engineering, RCR Tomlinson and Swick Mining Services. We own Monadelphous in our portfolio and started adding to the position around $8 and have added to our positon again as the company has started to announce improving earnings.

Resource company share prices have also started to reflect the first signs of recovery with some commodities having moved much sooner and more quickly than others. As mentioned iron ore and coal have moved significantly assisting the two majors RIO and BHP to experience share price recovery along with names such as Fortescue Metals. On the coal front Whitehaven Coal has been a stellar performer. Many other energy stocks have performed well including, but not limited to, Santos, Woodside Petroleum and Origin Energy. Each investor may have their personal favourites in this group or many of the other candidates not mentioned. The main theme being that these sectors have ‘run hard’ this calendar year.

The process of selectively entering resource companies with smaller 1% positions and then adding to positions as they perform or selling them if they don’t, allows us to enter into what might be the next resource boom on a risk adjusted basis and to enter into a trending market early in the trend.

What is clear is that most market participants do not own large positions in resources companies and resources have largely been out of favour for close to nine years. Our fund has benefited from being short resources over a four-year period. In calendar year 2016 these short resource positions lost money and were the first signs to us that the resource stock prices had stopped falling and are were now rising. Should our resource investments continue to perform we will be adding to these positions over time. If commodity prices continue to recover we should start to see the recapitalisation of medium and smaller capitalised resource companies and this in turn should lead to further investment opportunities much like it did in the last resources boom.

With resources being such a key part of the Australian economy it will be important in 2017 to watch the resources sector closely, particularly some of the ‘later cycle’ commodities, for signs of a continued resources sector recovery. Should history prove an accurate indicator of the resources cycle, market commentators and ‘experts’ will start to take notice once the resources index has doubled or tripled.