Moving beyond ‘The Lost Decade’ 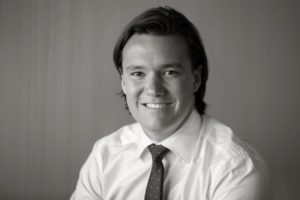 This article was written by Charlie Gray and was originally published by The Australian Shareholders’ Association in September 2018.

It is fast approaching the eleventh anniversary of the record high for the All Ordinaries Index, the high it set in November 2007 at 6,873. And while the index is within cooee of the old high, it has now been over a decade in which the market has failed to set a new high. This is an unusual situation for an equity market and even more unusual for Australia, which has been lucky enough to have the best performing market over the past 100 years. Some have even referred to the past ten years as ‘the lost decade’ for Australian equities. Certainly, it seems that way if you compare it to the previous decade, from 1997 to 2007, where the index more than doubled. 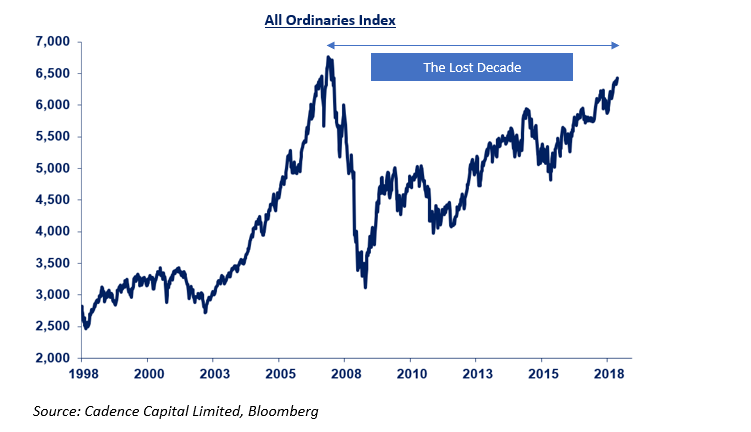 Unfortunately for Aussie investors, this has not been a global phenomenon with many international stock markets performing well over the period. The UK’s FTSE 100 Index passed its previous all-time high in February 2015 and has grinded higher since. Germany’s DAX index hit new highs in May 2015 and is now up over 50% from that level. The Nikkei, while a long way off its all-time high set in December 1989, eclipsed its 2007 highs in February 2015 and is up another 20%. The standout however has been the US. The S&P 500 is up over 100% from its previous all-time highs, and the NASDAQ has nearly tripled from the high it posted in October 2007. 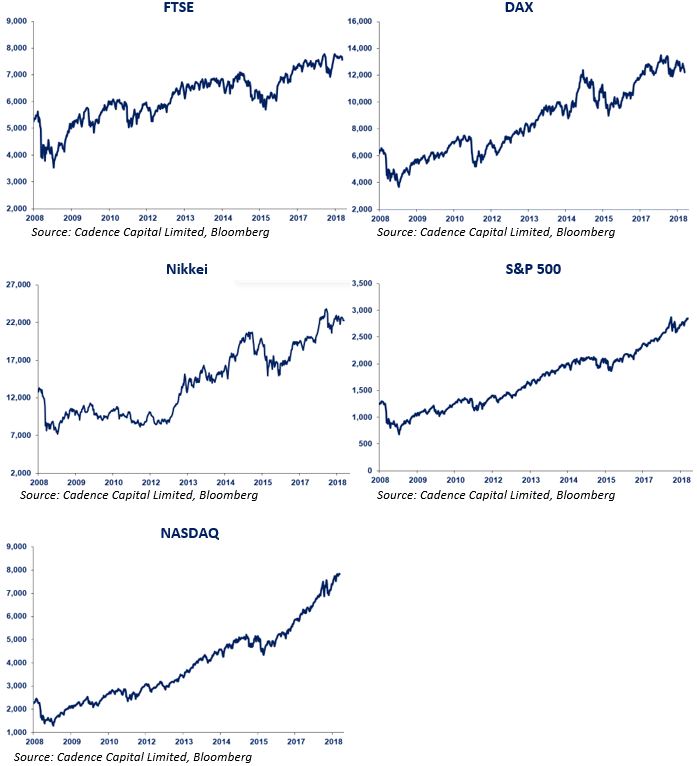 Why has Australia lagged its international peers?

So why has Australia lagged its international peers? After all, our financial system and economy was one of the least impacted by the GFC. We have not had a recession in 27 years, let alone in the last ten.

We believe there have been a few factors at play.

Firstly, there has been little change in market leadership at the ‘blue-chip’ end of town. The only change in the top five listed companies in Australia from 2008 to 2018 was WBC moving from sixth place to replace TLS. The others, BHP, CBA, NAB and ANZ, remain the same. Compare this with the US, where the only company that retained a top five spot was Microsoft. The other four spots, previously held by ‘old world’ companies, now reflect the ‘new world’, Apple, Google (Alphabet), Amazon, and Facebook.

These businesses have been able to grow exponentially through a period where many more cyclically exposed (read ‘old world’) businesses were faced with a more restrictive environment. Their products and services have been able to scale on an unprecedented level. For instance, over the decade Apple has sold more than one billion iPhones, with more than 216 million sold in 2017 alone, up from 1.4 million in 2007. Facebook now has more than 2.2 billion users, implying nearly one in three people globally use the platform. Its user base was 50 million in 2007.

Secondly, the big four banks, which speak for over 20% of the All Ordinaries Index alone, have faced an uphill battle. They have had to contend with increasing regulation since the beginning of the decade as the fallout from the GFC prompted regulators globally to move to improve the stability of the financial system. Australia’s banking regulator, Australian Prudential Regulation Authority (APRA), moved in kind with its international peers and implemented a number of changes to reduce leverage in the system. In particular, APRA increased capital requirements for banks, thereby reducing the number of dollars that could be lent out for each dollar in reserves, supressing growth. The decade also saw APRA increase its supervision of the property market, where for example in 2014 it introduced the 10% cap on investor loan growth in response to the strong rise in property prices fuelled by, in part, investor demand. Regulatory scrutiny has continued recently, with the Royal Commission likely to result in further action. Indeed, the potential separation of ‘advice’ and ‘product’ arms of financial institutions could have massive implications for the industry.

Thirdly, the Resources industry that near single-handedly drove Australia’s recovery from the GFC went through a colossal boom-bust cycle smack bang in the middle of the decade. The massive investments made by the majors to increase production to exploit China’s seemingly insatiable demand led to the build-out of significant excess capacity by 2011-2012. As supply exceeded demand, commodity prices plummeted, profits evaporated and workforces were ‘restructured’. As excess capacity was either rationalised or absorbed by demand over the next few years, commodity prices bottomed and then recovered, profits rose, balance sheets repaired, and staff began to be rehired. Over the past two years, we have seen this recovery continue and develop, with the Resources Index now up over 100% from its lows in 2015.

Elsewhere, we have seen the collapse of TLS, as its monopoly on poles and wires has been gazumped by the NBN, and mediocre performances from many of the other stocks that Australian’s depend on for yield.

Moving beyond ‘The Lost Decade’

So against this backdrop, a backdrop of negative concurrent conditions for Australia’s largest industries, we have noticed some market commentators continuing to be bearish on the outlook for Australian equities. Are they telling us to prepare for two lost decades in Australia, back to back?

While the future beyond the short-term, as always, remains clouded, history suggests another lost decade is unlikely. The All Ordinaries Accumulation Index has on average delivered 10% p.a. since 1900. The last eleven years have delivered 4.4% p.a. Indeed, the general scepticism in the media and from market participants is necessary for the market to climb higher, up the so-called ‘wall of worry’. Ironically, investors should be more concerned when all these commentators are bullish.

In fact, a few things come to mind which should see the market well supported over the long-term. The superannuation system in Australia is a unique advantage. Although it only really began in earnest in the early 1990’s, super has grown to become one of the largest sovereign pools of capital in the world. As of March 2018, there was $2.6 trillion in superannuation assets, making Australia the forth-largest holder of pension fund assets globally. More importantly, over 50% of the $1.6 trillion classified as investments was invested in equities. This is a fair source of demand and it will continue to grow. The minimum contribution by employers to super is anticipated to increase from 9.5% to 12% by 2025. This implies 26% growth of inflows alone, and this is before contemplating population and wage growth.

Australia is also remarkably well located, on the doorstep of Asia. The Asian region has been the dominant driver of world economic expansion, accounting for 68% and 63% of global growth in 2016 and 2017 respectively. Within this, the main contributor is China, which has accounted for approximately half of Asia’s growth or nearly one third of global growth. With millions of people in China still making the move into the cities, this growth in set to continue for years to come. This will support demand for commodities, both ‘hard’ and ‘soft’. It will also see increased demand for other industries exposed to China’s rising middle class. Tourism, consumer products and education come to mind. There’s already signs of companies tapping into this, with the rise of Treasury Wine Estates (TWE) and A2 Milk (A2M) for example.

Overall, there is plenty to be optimistic about looking out over the long-term. There are sure to be set backs on the way, market corrections, hiccups, and collapses. Nevertheless, the market has dealt with all of this and more over the past 100 years and has still managed to deliver relatively consistent, solid returns. Equities have been and will remain (in our humble opinion) the best asset class to compound and grow wealth over the long-term. Let’s check back in 2028 to see if the bulls or the bears prevailed.

Established in 2003, Cadence Asset Management is an independently owned Sydney-based Equity Fund Manager that combines both Fundamental and Technical research with the aim of delivering above market risk adjusted returns.

Cadence Capital Limited (ASX: CDM) was listed on the ASX in December 2006 and has produced returns of 15.5% p.a. since inception. A substantial portion of the team’s personal wealth is invested alongside investors. We believe this alignment of interest is critical in funds management.