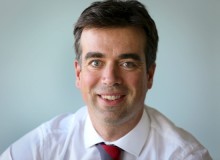 Following Karl Siegling’s article in the May 2016 edition of Cuffelinks titled “Commodities: Has the trend changed?” we will look in detail at two of our current commodity positions – a short position in Rio Tinto (RIO) and a short position in Woodside Petroleum (WPL).

Cadence is able to short sell stocks, which means we believe the price of the stock will fall.  Our investors benefit when stocks that we have short sold fall in price.

We have been short RIO for about two years and WPL for one year.  Both positions have fallen in price since we have been short, and therefore have done well for our fund.  The trend in these two stocks has been down over the last few years, but recently the share price of both stocks has stabilized.  We are now asking the question: Has the trend changed for these stocks?

Rio Tinto has operations that span many commodities but iron ore is by far the most profitable division.  In 2015 87% of RIO’s underlying earnings came from the iron ore division.

Some basic metrics for RIO are: 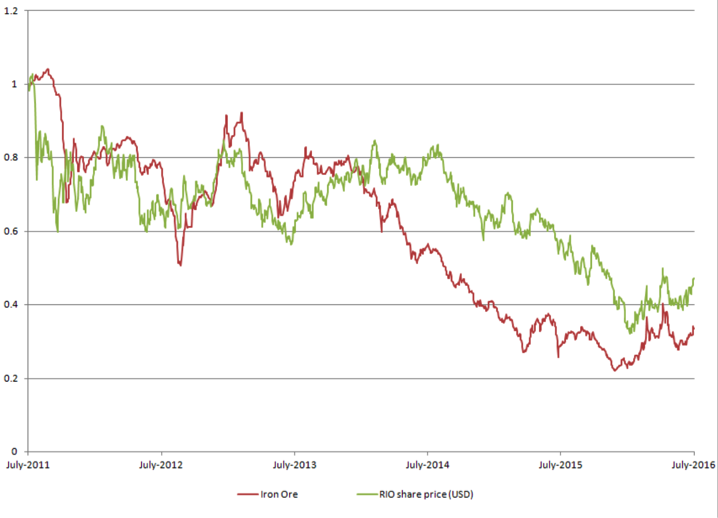 The low point for iron ore was USD 38 per tonne in mid December 2015. Over the past six months the price has risen about 50% and is now USD 57 per tonne. We expect RIO’s earnings for the first half of 2016 will be below 2015 levels, and that the second half will be broadly in line with 2015 levels if the iron ore price does not change from here.

The fact that RIO is trading on a price earnings multiple that is broadly in line with the market suggests that investors believe that iron ore will trade at around these levels for the medium to long term, and therefore any move in the iron ore price will be likely to cause a similar move in the RIO share price.

The chart below shows the iron ore price over the past 30 years. The uptrend was caused by increased iron ore demand, primarily from China, with no immediate supply increase due to the fact that new mines take years to construct. By 2011 new supply began coming online, and the uptrend ended. As more and more supply came online the price fell. The iron ore price has now been relatively stable for about 12 months, and we are asking ourselves: has the downtrend ended?

We have seen some smaller high cost mines cease production due to the iron ore price falls, but the price has not fallen far enough for any of the large producers to reduce production. Some analysts have suggested that the price will keep falling until large producers start losing money, which would happen at around USD 30 per tonne. Of course the analysts are not always right, and it is possible that the iron ore market will move into balance without any large mine closures.

Woodside is an oil and gas company. Over time Liquid Natural Gas (LNG) production has become the largest part of WPL’s operations, with LNG now contributing over 60% of WPL’s revenue, and conventional oil and gas making up most of the remainder.

Some basic metrics for WPL are: It can also be seen from the chart that the WPL share price is less volatile than the oil price. This is primarily due to the fact that WPL has LNG contracts in place for most of its production. These contracts usually link the LNG sale price to the oil price, but also have mechanisms that protect WPL if the oil price falls significantly, as it has done over the past 3 years.

If the oil price stays low, then over time the existing contracts will come to an end and any new contracts entered into would see WPL achieve LNG prices that were more in line with the oil price.

WPL is currently meeting both our fundamental and technical criteria for a short, but the WPL share price downtrend and oil price downtrend have been weaker in the last six months than over the past three years. In line with our process we will look to buy back WPL if more evidence emerges that the trend has changed.

The conclusion is the same as in Karl’s article in May:

“As we write this article we know that recent price movements have at a minimum tested long term resource and energy price trends and may be indicating a longer term change in trend. Only time will tell, but our process for dealing with these trends is well-defined. We are not professing to ‘ring the bell at the bottom’ but the bell may currently be ringing.”