This article was written by Karl Siegling and was originally published by ASX in March 2018.

Every discussion on the mining services sector should start with the concept that commodity prices go up and down based on demand and supply, and resource company profits go up or down. So, too, do those of mining services companies.

Put another way, resource company profits are a derivative and more extreme version of commodity price moves. Mining services company profits follow the movement and the diagram below shows this relationship. 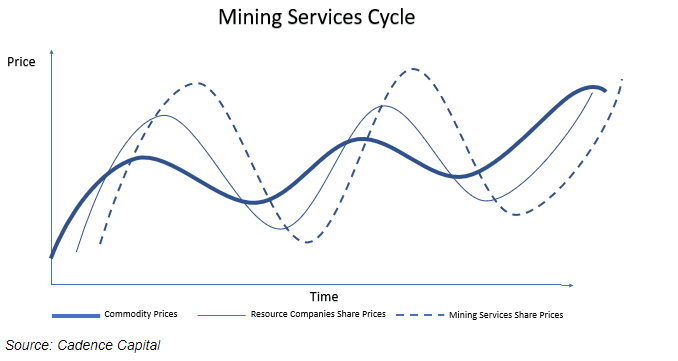 This inter-relationship and co-dependence between commodity prices and resource company and mining services company profits produces some strange and repeated cyclical behaviour with interesting and disturbing outcomes.

Presume you are a newly appointed executive of a copper mining company – appointed because nobody else wanted the job. The cost of mining at your mine is higher than the current copper price and copper reserves are low because the company has done no exploratory drilling because of the low commodity price.

The best you can do is keep costs as low as possible to reduce cash flow losses. Gradually the copper price goes up because every other copper mine has similarly reached the conclusion that there is no point mining.

A copper shortage emerges, and the day arrives when it makes financial sense to start mining copper again. You put a tender out to several mining services companies (the ones that have survived the downturn or a new one).

At this stage, the resource company continues to lose money and at a greater rate because you are now spending money to mine copper but have not yet sold any.

Eventually the copper starts to be mined, gets sold and your mine starts to produce profits. In the interests of increasing shareholder returns you do more exploration drilling. You put out several more tenders to mining services companies when you realise you have significantly underinvested though the commodity cycle downturn.

Profits improve dramatically at your copper company due to higher prices and higher volumes you are producing. Depending on how aggressive you have been, you may even win the Copper Miner of the Year Award for most improved profits.

Whilst you and your carefully chosen mining services providers are implementing this strategy every other copper miner and producer in the world is implementing a similar strategy to varying degrees of success, and on slightly different time lines, depending on when they reached the conclusion that copper prices were going up.

Eventually, so much new copper is being mined that the world is awash with stockpiles. Prices start to fall as end-users realise there is plenty of copper and they demand better prices. They continue to fall, and your copper company profits begin to plummet.

Eventually the board will be forced to fire you because of plummeting profits. You see the writing on the wall and resign taking your Copper Miner of the Year Award with you.
You feel badly done by but spare a thought for the mining services companies you engaged who aggressively expanded capital expenditure and labour based on higher commodity prices, only to have contracts terminated when the board of your company decided to mothball operations for an indefinite period.

The mining services companies now have a lot of new equipment, a pile of debt and many more workers to pay or terminate.

The board of your now former company eventually finds a replacement for you who is prepared to manage the mine on a “care and maintenance basis” and to aggressively lower costs.
The entire cycle begins again.

Where we are in mining services cycle
Bringing this tale alive and up to the minute, let’s discuss where are we currently in the commodity price cycle, the resources profitability cycle and the mining services cycle.
All the mining services companies that could not survive the last downturn because of excessive debt, lack of revenue or high costs have gone bankrupt. Many barely survived and accumulated large amounts of debt and a large surplus of assets, which sat idle on the balance sheet with very few contracts.

A select smaller group of mining services companies did not go into debt near the top of the cycle and resisted acquiring more assets and increasing capital expenditure at, or near, the top of the cycle. They hold cash on the balance sheet and the correct number of assets to fulfil existing contracts.
Resource companies have completed the cost-cutting exercises associated with lower commodity prices just as commodity prices have started rising again, and it now makes sense for these same companies to again start mining commodities at current prices.

This is leading to surging profits and a requirement for a surge in capital expenditure, and a surge in new contracts for mining services companies.

Looking at the Cadence Capital portfolio you will see many mining services stocks, which we began scaling into as commodity prices started to recover, along with resource company profits.

(Editor’s note: Do not read the following ideas as stock recommendations. Do further research or your own or talk to a financial adviser before acting on themes in this article).
These include Monadelphous (MND), Emeco (EHL), MacMahon Holdings Limited (MAH), Boom Logistics (BOL) and Imdex (IMD). At the time of writing, more than half of these mining services companies have reported December 2017 half-year earnings with very similar results and earnings outlooks.
These companies are all currently experiencing very strong revenue and earnings growth, a clear trend to increased capital expenditure by resources companies and a large forward-looking pipeline of work.

The All Ordinaries Resources Index is up more than 100 per cent and we can expect that if this resources and mining services recovery follows the same pattern as previously, we should expect to see strong mining services earnings growth, strong share price appreciation and strong capital expenditure across the sector.

Because of the cyclical nature of commodities, resources and mining services we should be vigilant in assessing how aggressively each of these participants are in this initial recovery and how carefully they manage their capital when the trend inevitably ends.

For now, however, the trend is firmly in place and industry participants are expecting increased revenue, profits and share price appreciation.