As all investors should at this time of year, the team at Cadence Capital contemplate what lies ahead in the investment markets and try to form a view.

Ultimately we are “bottom up” analysts and our macro view serves only to set the stage for the companies we will visit and the sectors where we think there may be a large change in expected earnings.

We do not simply develop a macro view and then start investing based on how we feel at the time. That said, contemplating the established trends in the market and the areas where there may be trend change can be useful in the thought process.

Here are six trends for 2015 that we are exploring.

1. The resources boom has ended

The fact that the resources boom, as shown by the S&P/ASX 200 Resources index above, has ended should not surprise anyone. What bears further thinking though is what happens after a resources boom ends; more specifically, how bad does it get?

What we know to be true from previous booms is that super profits from extracting commodities fall, and many companies that extract commodities at high prices go bankrupt or into receivership and projects simply get put on hold. Reduction in capital spending leads to a reduction in mining services work, which in turn leads to redundancies across the industry.

Companies tend to have high capital expenditure leading into the crescendo of the boom and then go through a process of reducing expenditure when the boom has ended. Of course, we all hope that this time it will be different and the end of the boom will not follow this cyclical path.

However, hope alone will not alter the outcome, and the outcome based on history is that after the boom comes a bust, although we would hope the air gets gently let out of the balloon rather than an explosion. Managing the end of the resources boom will be a delicate task.

Assets that benefit most from falls are those that are most sensitive to interest rate movements. That is, residential housing, infrastructure assets, property trusts, financially engineered and leveraged products, banking stocks, financial services stocks and diversified financial services stocks. These are the stocks that have rallied and performed extremely well since the GFC.

Ironically enough, it is these sectors that now face the highest sensitivity to interest rates moving up again. We can say with absolute certainty that rates will rise again one day. Much like commodity prices, interest rates are cyclical in nature and the demand and supply of money varies with the price of money (interest).

The Australian dollar peaked most recently at $1.1065 against the US dollar and at the time of writing is around 83 cents. The currency has fallen about 25 per cent since its recent high and a further fall of 25 per cent is not beyond the realms of possibility. As outlined by the Reserve Bank of Australia, it sees a move to 75 cents more likely than a move to 95 cents.

Should interest rates in Australia fall early in 2015 and those in the US rise, this will simply add impetus to the firmly established trend of a falling Australian dollar. That creates opportunities and challenges. Tourism trends reverse, with Australians holidaying domestically and overseas visitors again being drawn to Australia. Exporters’ products become more competitive and imported products become more expensive, curbing excessive spending on expensive overseas goods.

Superannuation has grown to nearly $1.9 trillion, according to the Australian Taxation Office. We estimate the pool will grow to around $3 trillion in the next seven years. To put this in context, the entire Australian Securities Exchange market capitalisation is around $1.2 trillion to $1.4 trillion. The superannuation pool looks set to be at least twice the size of the value of every ASX-listed company combined.

This money, well invested, represents a significant opportunity for the Australian economy. Investing a portion of these funds offshore will also diversify and protect local returns from the established trends of a falling resources sector and a falling Australian dollar. 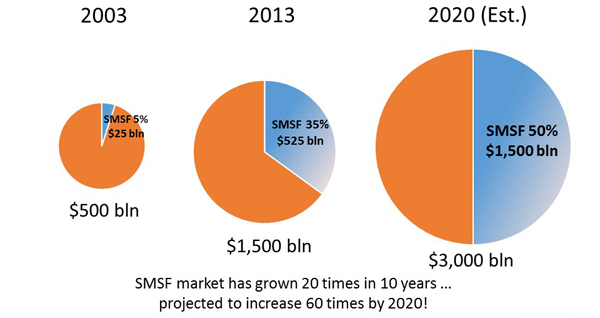 As briefly outlined above, the falling resources sector and Australian dollar makes overseas investments in overseas currency an attractive potential investment. The ASX represents about 2.5 per cent of the world’s market capitalisation. The remaining 97.5 per cent presents a host of varied and alternative investment opportunities and should enable the large superannuation pool to realise a greater level of overall return.

At the very least, overseas investment should provide an opportunity to deliver returns with more diversified risk across specific countries, sectors and companies.

6. Mergers and acquisitions (M&A) should materialise

Low interest rates, domestic companies increasingly striving to deliver earnings-per-share growth, and a large disparity in the relative fortunes of different sectors within the Australian economy, provide a perfect cocktail for increased mergers and acquisitions activity.

What has been surprising is that we have not seen more in 2014. However, 2015 may well be the year M&A activity moves into full stride.

With these established trends, we find ourselves in an interesting investing environment. As always, these trends result in many problems and many opportunities. Ultimately though, there are always opportunities to outperform the market, and it is the role of investors to find them.